Debunking The Myths: Why You Should Not Pull Your Child Out Of French Immersion 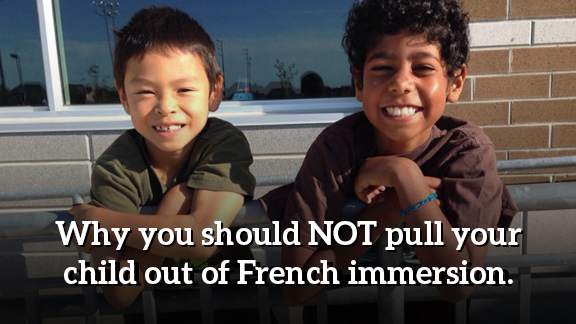 To continue with French Immersion or not – that is the question!

As the director of a long-running French camp in the GTA, concerned parents of children in grade 6 and 8 often approach me looking for answers to this important question:

“Why should I NOT pull my child out of French Immersion?”

There are a number of reasons parents are concerned about keeping their children in the French Immersion program. In my experience, most of these myths start in the classroom. Or in other cases, the issue centralizes around transportation. In today’s post, you’ll understand why French Immersion is worth the extra driving time!

If you or someone you know is currently grappling with this all-too-common debate, then this post is for you! I’m going to share the conversations I have had with parents just like you so that you can be better equipped to make an informed decision.

“My child has already learned French, so why continue?”

If I had a dollar for every time I heard that argument, I would be a millionaire!

There is one big hole in that argument and it is this: Language is not something that you ‘have’ or that you possess. Unfortunately, you can’t put French in your toolbox and then wield it out whenever you need it.

In order to truly master a language, it takes consistent practice, time and effort. Once you stop practicing, you lose the language. You would be surprised at how quickly your vocabulary, comprehension and grammar plummets.

This phenomenon is known as language attrition. In other words, “use it or lose it!”

If your child quits French at grade 6 or 8, then by the end of high school they will likely have very little French left.

“If my child leaves French Immersion, their grades will improve.”

Certain studies also show that immersion students have greater success than students in the regular program and even those in English language arts (Turnbull, Lapkin and Hart 2001; Lapkin, Hart and Turnbull 2003).

“My child plans to pursue engineering, science or math – so why should they continue with French?”

If your child wishes to pursue a scientific or mathematical field, then having French on their University or College application has a significant advantage. French Immersion will help your child stand out among other unilingual applicants with similar grades.

“I understand the benefits, but I still want to switch my child to the English track.”

Regardless of the flurry of benefits in keeping your child in French Immersion, you might still feel that it would be best that your child move to the English track.

Does that sound like you? Often time, this is motivated by the fact that your child wishes to attend a specialized high school for arts, music or another specialty. Also, sometimes the distance to the French immersion high school is a barrier to attend since most school boards do not provide transportation after grade 8.

If that is the case, you should be aware that it requires significant effort to help your child maintain their French. Luckily, I created a shortlist of tips you can use:

Do you have any other major concerns about keeping your child in the French Immersion program? Share your thoughts in the comments below.

Whether your child remains in the French Immersion program or not, it is vital to set your child up for success in French. And one excellent way to help your child skyrocket their French skills is to keep them immersed – even when they are outside of the classroom. You can do this by organizing French-only play dates, watching French television and signing them up for Camp Tournesol’s French Camp.